Taste True Spanish Culture: 10 Types of Tapas You Need to Try in Spain 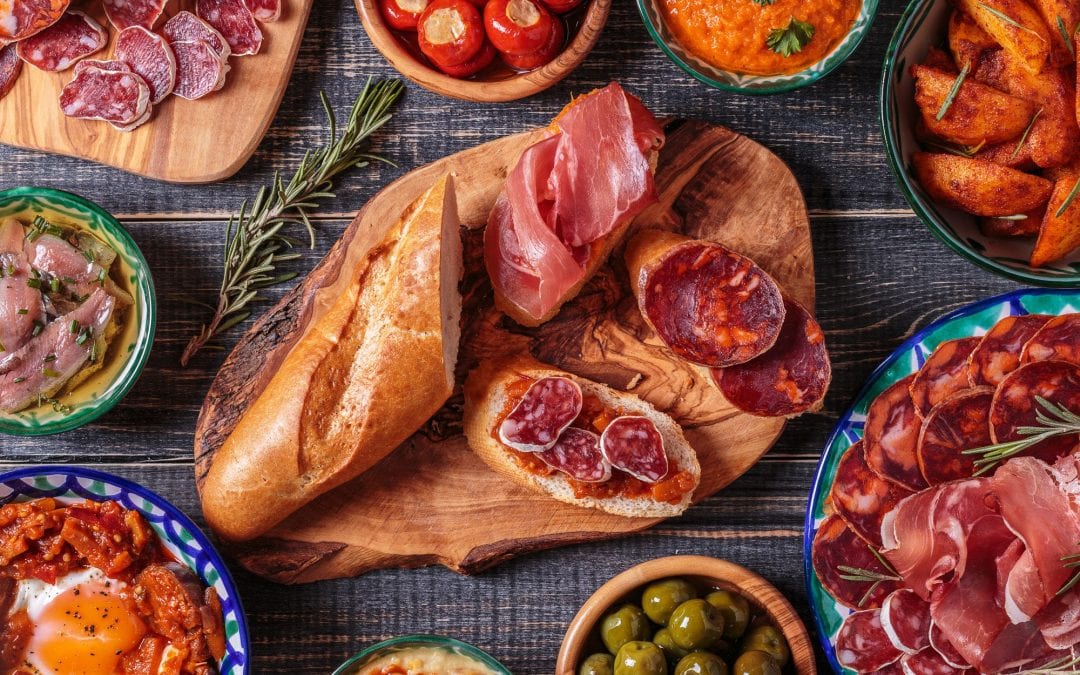 Spain is a tourist hotspot for a variety of reasons. From its long and rich cultural history to its laid back beach resorts, it is easy to see why so many people flock to this Southern European country. However, in recent years, Spain has been gaining a reputation as a foodie paradise.

With so many different types of tapas to sample, it can be hard to know where to start. Well, here is a handy list of 10 of the tapas you need to try in Spain.

What Exactly Are Tapas?

Tapas are small appetizers served as snacks with drinks or together to create a meal. Thanks to their small, almost bite-size serving sizes, they tend to be fairly informal and many people eat them standing up in bars all over Spain, but especially in the southern part of the country. They can consist of simple potatoes with a dipping sauce to more ornate, almost mini-meals of small cuts of steak with veggies.

They date all the way back to the 13th century when it is said a law was passed that every tavern had to serve food with wine and beer. However, it is more likely that the tradition started because farmworkers would eat small snacks throughout the day to keep their energy levels up.

So, now that we have a little background and history, let’s look at some of the types of tapas you are bound to find in your Spanish adventures.

Patatas Bravas are the most popular, or at least the most recognized, tapas around the world. These potato bites are fried in oil and served with either a spicy tomato sauce, up north, or with an aioli sauce, in the south. In Madrid, they serve these tasty treats with sweet and spicy pimenton sauce.

These tasty deep-fried bread treats are traditionally filled with meat, usually ham, and cheese, most often a creamy béchamel. However, as more restaurants are willing to experiment with new taste sensations, you will be able to find them with crab, mushrooms, and various cheeses. Like Patatas Bravas, they are served with a variety of dipping sauces with the most typical being aioli.

This cold soup is originally from Andalusia, the southernmost region of Spain but is now popular all over Spain and Portugal. It is made from raw vegetables and garlic and then blended with oil and vinegar to create a tangy, spicy flavor. It is often served over ice and is perfect for a refreshing treat during the hot summer months.

This omelet dish is made with thinly sliced potatoes and bound together with egg. It also usually contains a little bit of red onion to add a bit of flavor. While it is usually presented in a large pie, as a tapas dish it comes served in small, easy to eat wedges.

Consisting of pork medallions marinated in whiskey or brandy and then fried in olive oil, this tapas dish is popular in Seville and the surrounding region. Packed full of smokey flavor, it is a great way to sample some of Spain’s famous pork. It’s often served with fries to sop up the tasty sauce allowing you to enjoy every last drop.

While Spain may not come to mind when someone says “cheese”, it really should. While manchego is famous and a staple of tapas menus around the country, there are tons of other great cheeses to ask for too. From mild cow’s cheese to tangy sheep’s cheese there are plenty of taste sensations for any palate.

So, if you order a cheese plate, get ready to try some of the most popular cheeses Spain has to offer, as well as local ones. There will also be slices of bread or breadsticks to cleanse your palate, allowing you to enjoy each individual cheese.

Spain is known for its many seafood dishes and one of the best and tastiest of these is Gambas al ajillo, or prawns in oil. Consisting of fresh prawns cooked in olive oil, garlic, and chili peppers, it is a spicy offering which pairs well with beer to temper the heat. It is easy to see why this is one of the most popular tapas among locals.

These tapas are a staple of Spanish cuisine due to the ease which they can be eaten. Filled with everything from meat to pork to cheese to veggies, they resemble baguettes, just shorter, wider, and toasted. Traditionally they are served plain, however, more and more gastropubs have started using special sauces to enhance the flavors of the main fillings to create a unique taste sensation.

These meatballs smothered in sauce can either be served by themselves or with any number of other dishes. Made from beef, pork, or a combination of the two and cooked in a garlicky tomato sauce you eat these succulent meatballs with toothpicks.

Spain is known for its various hams, most famously Jamon Iberico and Jamon Serrano. It comes from the hind leg of a pig and is dry-cured for many years before it is served.

On tapas menus, it is most often paired with a sample of cheese to help bring out the subtle flavor of each of the regional hams. Stack it on a piece of bread for a little open-faced ham and cheese sandwich to nibble on while drinking tempranillo for an amazing taste sensation.

These are just a small sampling of the types of tapas available in Spain. There are plenty of others ranging from simple snacks to far more ornate offerings so you get a better idea of Spanish cuisine one tasty bite at a time.

If you are planning on spending a lot of time in Spain, why not consider a timeshare? The Marriott timeshare at Marbella Beach Resort is a great option!