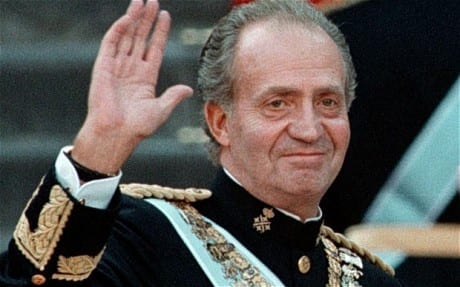 We know it has nothing to do with timeshare directly, but the big, well, massive news in Spain yesterday was that the King of nearly 40 years has decided to stand down and pass the throne to his son. We couldn’t let the news pass by without a mention.

In a highly emotive speech, outgoing King Juan Carlos reveals that he believes a ‘new generation’ with ‘renewed energy’ should take over as head of State and lead Spain through ‘necessary changes’.

His decision to abdicate in favour of his son, Prince Felipe of Asturias, is due to a desire for the younger generation’s ‘clamouring to take a leading role in their destiny’, and one which the Monarch’s own generation played ‘during a critical turning point in Spain’s history’.

“The Prince of Asturias has the necessary maturity, training and sense of responsibility to take on the role of Head of State with full guarantees, and embark on a new era of hope in which acquired experience and the drive of a new generation come together,” the King announced at lunchtime today in a press conference.

“In this, I am sure, he will have the support that he has always had from Princess Letizia.”

King Juan Carlos repeatedly thanked the people of Spain for their loyalty and backing, saying he had shared in their successes and trials.

He concluded with an expression of gratitude to his wife, Queen Sofía, ‘whose cooperation and generous support has never been lacking’.

KING Juan Carlos’ abdication is not ‘official’ until the government’s Council of Ministers approves a new law to make his standing down ‘legal’. This is in accordance with Article 57.5 of the Spanish Constitution which states that any abdications will be resolved by ’emergency law’ – or ‘organic’ law, which means it is effectively pushed through as a result of pressing need but is open to change or extension later on.

And despite Spain having seen six previous abdications, HRH Juan Carlos I’s decision is unprecedented in modern history and in the 36 years the Constitution has been around, such a turn of events has never been prepared for.

Only Article 59.2 covers the temporary incapacity of the reigning monarch. Any new law will have to contemplate whether the King’s decision was made of his own free will rather than under pressure.

Today (Tuesday) in Parliament is being dedicated to lawmaking, and the government is up against time to make sure there is no period in which Spain is left without an official Head of State.