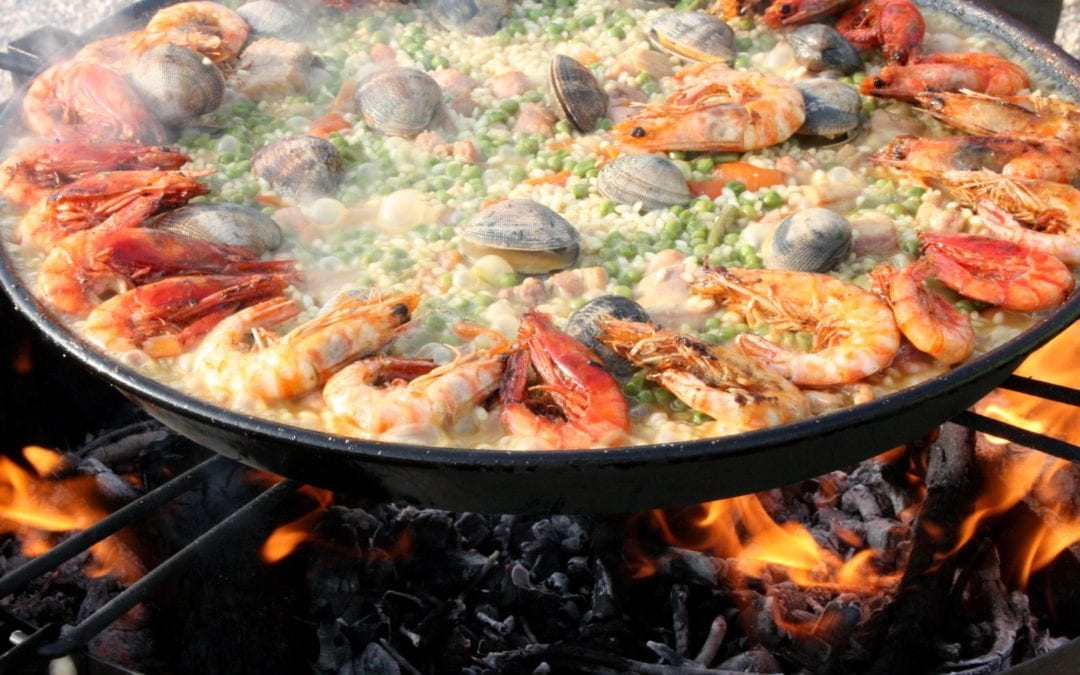 You don’t need to go to Spain for tapas, but why wouldn’t you? You can find the beautifully rounded riojas and juicy Garnacha in any well-stocked Tesco, but why not experience them beachside during and Andalusian sunset?

Spain is a treat for the senses. The air, the sea, the culture and the food all meld into the perfect holiday from colorless work life. Take your tastebuds on an epic tour of Spain in just a few bites.

Spanish cuisine embraces influences from North Africa, France, the Levant, and even the New World. Read on for tantalizing treats to try when in Spain.

The Geography of Spanish Cuisine

Spain’s Iberian peninsula location means that much of the land is surrounded by water. Spanish gastronomy embraces all products of the sea. The countryside is diverse, with mountain ranges, pasture, fertile farmland and more.

Spain is famous for its olives and vineyards (courtesy of the Greek and Roman cultures. Spanish mountain forests produced the legendary Iberico pig, traditionally the only type of pork used for the legendary Serrano ham.

This leads us to the very first item to sample from Spanish cuisine.

The process differed little in Roman times. Iberico pigs, allowed to forage and fatten on acorns before slaughter in November, make the finest ham. Curing takes place over a year while the air of the changing seasons does its job.

Try paper-thin slices of jamon with your glass of wine or enjoy croquetas de jamon.

Outside Spain, this is a simple dish of scrambled eggs with potatoes. In Andalusia, this omelet is elevated to high art. Potatoes, eggs, onion, salt, and pepper baked in a dish and served in wedges. It sounds so plain, but it’s heavenly.

Look for local variations. Each region (and each good Spanish mama) has its own specialty. Try them all with a bit of sherry!

Taste the flavors of the New World through a Spanish lens in this simple, refreshing cold soup. A versatile Spanish dish, cooks prepare gazpacho in a few different ways. No matter what, good gazpacho includes ripe tomatoes, refreshing cucumber, onion, garlic, a drizzle of good olive oil, a splash of vinegar and salt.

Gazpacho can be a warm or cold soup, a salad or even a stew. Look for it served as a smooth puree topped with a bit of ham, croutons or chopped vegetables.

Cheeses are aged three months, six months or at least a year for a depth of flavor. Enjoy a sliver or two on its own or with a slice of the membrillo (quince sweet.)

Thank Spain’s Moorish roots for this dish. Each Spanish region contributes to flavors. Saffron and rice from North Africa, a bit of salty ham or chicken or even rabbit, tomatoes and seafood, what else could approach the level of a national dish?

In Valencia, expect a traditional paella to include rabbit, chicken, escargot (snails) and beans. In other areas, fish and shellfish dominate.

Another simple dish with thousands of variations. “Fried potatoes with a sauce” is all the description given. But what a sauce!

Madrilenos make their sauce with pimenton (the sweet and spicy kinds) but never tomatoes. Other regions insist on garlic, onions or even anchovy. Add some good olive oil, stock, and flour to bind it all together.

Another treat with hundreds of variations. Chorizo is pork sausage, usually fermented, cured and smoked. It can be sweet, spicy, dry and crumbly or oily. Served fried or simply sliced, it’s the perfect bite in between sips of wine.

Spanish chorizos contain pork, salt, pimenton, and spices. Chorizo regional variations include finer or coarser grinds, the use of sweet or spicy peppers, and shape.

These deep-fried, thin dough sticks with a cup of thick, steaming chocolate are a morning or late afternoon treat throughout Spain. Enjoy them plain or rolled in cinnamon sugar. You may find the dough in loose spirals, batons, or horseshoe shapes.

A French Basque crossover, this traditional cake is a very rich, biscuit crust with pastry cream and raisin filling. The top of the cake is molded with a traditional crosshatch or pressed pattern.

The flavoring is a Basque brandy liqueur called Patxaran or rum. Have a slice when you crave something sweet at the end of a meal or with an afternoon coffee.

“Heaven’s little pig” or “Little bacon from heaven” are funny names for a dessert that contains no pork products. This Andalusian sweet is similar to flan but has a lighter texture. It’s traditionally made without milk products.

It’s just egg yolks, sugar, and water, topped with thin caramel syrup. Rumor is that it was invented to use up extra egg yolks after the whites were used to clarify sherry.

Spanish cuisine is more than traditional foods. The modern scene includes exciting chefs and innovations. Ferran Adria put Spain on the map, as far as avant-garde eating, with his molecular gastronomy.

Chefs like Juan Mari Arzak and Carme Ruscalleda win accolades (and Michelin stars) as they re-define Spanish food. Dining artistry aside, Spanish food is about pure ingredients and preparation to make them shine.

A few olives, some jamon and simple grilled fish with salt and lemon, beachside in Marbella. It a great introduction to Spanish flavours. We can get you started with the resort lifestyle, right now. Contact us to learn more about Marriott’s Marbella Beach Resort stays today.