The Rolling Stones and their relationship with Spain | Fab Timeshare | No.1 Marriott Vacation Club Timeshare

The Rolling Stones and their relationship with Spain 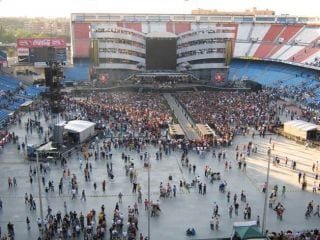 The Rolling Stones are no strangers to Spain and have wowed fans there for nearly 40 years. Could their concert in Madrid last week have been their last in the country?

With 21 ‘sell out’ concerts performed in the country in 38 years it is not difficult to see that The Rolling stones have a special appeal for the people of Spain but to understand the origins of that attraction you have to go back to the June 11, 1976 when The Plaza Monumental de Barcelona was the venue for the group as they became the very first International Band to visit the country following the death of Franco.

At the time there was no shortage of unrest with lots of tension as police in their riot gear quelled political demonstrations throughout the surrounding areas both during and after the landmark show.

Last Wednesday’s concert , at the Santiago Bernabeu Stadium in Madrid, where  despite the collapse of the on-line system, 80,000 tickets sold out within just 11 hours of going on sale, was a much more traditional affair. Despite the soaring demand, no longer is attendance at any concert by Jagger, Richards and company, a matter of life or death.

But because the Stones are the Stones, as the most long-lived rock band on the planet jumped up and down on the stage at the Bernabeu for possibly the very last time, 38 years and 14 days since their first performance in the country, for the generations of people that have enjoyed their songs live, families united by rock and countless memories, their Satanic Majesties, Mick Jagger (guitar and lead singer), Keith Richards (first guitar), Ron Wood (rhythm guitar) and Charlie Watts (drums), altogether add up to 285 years of age, though their energy onstage made them seem like a bunch of 20-year-olds riding the crest of the wave.