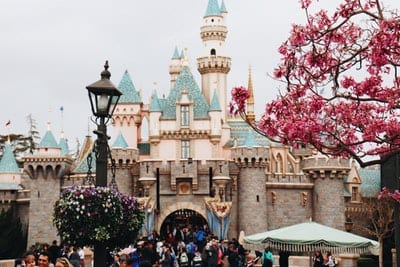 Children of all ages understand the magical, whimsical delights that the wonderful world of Walt Disney has created. And what better joy can a child experience than seeing their favorite characters and castles alive, in the flesh?

Disneyland Paris is nestled right in the heart of Europe, a perfect destination for you and your family. There plenty of attractions in Paris to check out when planning for your magical Disneyland Paris adventure.

Let’s dive into what makes Disneyland Paris attractions so special.

Disneyland Paris is a truly wonderful delight for children of all ages. The cornucopia of attractions, theme park rides, familiar faces, and a host of other treats allow something for everyone.

Below are the unique rides exclusive to Disneyland Paris. Let’s take a look at our top nine picks!

Sleeping Beauty Castle is a highlight in Disney theme parks across the globe. But, this particular castle is hiding a little secret that’s not quite like any other.

Lying below the castle, hoarding a lair all to her own, is a dragon!

Le Taniere du Dragon (The Dragon’s Lair) is home to one of the biggest animatronics around. Brave adventurers to this dragon can witness her roaring, breathing smoke rings, and flapping her wings.

She is sure to send a shrill from any tiny terror attempting to spoil her slumber. But fair warning, to exclude her from your Disneyland Paris castle tour would have even greater consequences…

You may be familiar with Space Mountain at Disneyland California and Walt Disney World’s Magic Kingdom. But Disneyland Paris does it a little different — get ready for a radical sequel!

They’ve upped the ante in this high-stakes upgrade. No longer are riders bumbling along on the timid, mousey trains of the original. Instead, passengers are launched at high speed around a twisting, turning rollercoaster with lots of loop-de-loops.

It might not be quite the experience that dedicated fans of Jules Verne’s De la Terre à la Lune might be expecting. But it’s still a fun homage in a fast-paced world. Give it a go!

Les Mystères du Nautilus is a walkthrough attraction unlike any other.

Part of the retro-futuristic Discoveryland park, this unique ride is a recreation of Captain Nemo’s submarine from another one of Verne’s classic, 20,000 Leagues Under the Sea.

Partially submerged in the depths below, some guests will often walk right past it without knowing all of its secrets!

What makes this walking attraction so special is that the interior of this submarine is completely decorated. Worthy explorers will discover a stunning atmosphere with great attention to detail to Captain Nemo’s submarine.

It’s like walking right into one of the pages of Jules Verne’s fictional universe.

Is there a Finding Nemo fan in your family?

Crush’s Coaster quickly became a favored attraction with its release in 2007. Join the fishy cast and their turtle friends on this nautical ride along the EAC — East Australian Current.

Modeled after the Maurer Söhne spinning roller coaster, guests will enjoy riding along in turtle shell vehicles. Swimming among them will be their favorites like Marlin, Dory, and plenty of squishies!

This attraction might seem a bit out of place in a Disneyland park, but it’s a unique treat.

Walt Disney Studios’ Les Effets Speciaux is a featured demonstration of how some of the mega-budget special effects were created for the feature film, Armageddon (1998).

We won’t spoil anything for you…except for this one tidbit!

The final attraction of this feature is a spectacular recreation of Space Station Mir. A stunning set-piece for any fan young and old to marvel at with wonder. Inspiring many space explorers to come!

Is Toy Story one of your top flicks? We’ve got a treat for you!

RC Racer is a Disney park ride that opened in 2010. As you’ll remember, there’s a thrill-packed sequence in the movies involving a remote-controlled race car. This attraction takes inspiration from that!

Themed around the Hot Wheels cars in the movie, this “half-pipe” roller coaster design offers a fun experience for all! Climb aboard and ride along with Woody and Buzz as you soar into the sky higher and higher.

This themed ride lets you go on an adventure all of your own!

In Ratatouille: The Adventure, passengers climb aboard their rat-shaped vehicle. Once settled in, guests will follow Remy as he hops and scurries through the hectic kitchen of Gusteau’s famous restaurant! There are a few close calls along the way, but it’s all in good fun.

What’s unique to this attraction is that the ride vehicles don’t follow a track. This leaves you to create whatever adventure you want within the ride! Take it again for a second time for a whole new experience.

This labyrinth ain’t no child’s play!

Another walkthrough attraction, Alice’s Curious Labyrinth is an extensive, elaborate maze carved into the hedges of Fantasyland at Disneyland Paris.

Get lost among the flowers and discover a host of friendly faces familiar to this classic Disney animation. Fans especially adore the enormous floral recreation of the Cheshire Cat’s face, but you have to find it!

Those who make their way to the center can climb atop the Queen of Hearts’ castle. There, they’ll be able to gaze upon the full reach of the labyrinth. Be sure to note any attractions within the maze you want to check out on your return trip!

Walt’s is a restaurant dedicated to the man himself. A must for any fan!

Featuring Victorian-era design and dining, this restaurant has six differently themed rooms, after Disneyland Paris park itself. The menu boasts all the culinary craft that you’d expect of French cuisine, with flavors found all around the world.

Guests can find old photographs and trinkets sprinkled throughout that inspired Walt Disney in his career as a filmmaker and theme park designer. The six rooms each include decorations and artwork from the early design phases of each section of the park.

Both prix fixe and a la carte options are available.

When You Wish Upon a Star…

Disneyland Paris attractions and rides are a dream for any child, both big and small.

And you can make those dreams come true! Dreams that will last a lifetime, expanding across future generations to come.

Contact us now to book your next home-away-from-home in Paris today!