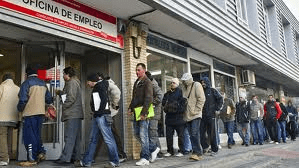 The Spanish economy, like most of Europe, has seen a drastic decline over the last few years and the effect this had on the unemployment rate has been astronomical.

Here is some good news! Thanks to the growing tourism trade, the unemployment rate as seen a decline over the holiday months as businesses need help with the growing trade they are seeing in the warmer months.

Helped by hiring for the holiday season, the number of people registered as unemployed fell in June.

It was down by 122,684 from the previous month. However corrected for seasonal factors, the jobless total decline was a more modest 16,113.

The total of people who are in work rose to nearly 16.7 million, with the registered unemployed falling to 4.45 million.

The number of people who found work in June – 56,622 – was the highest since Spain’s unemployment crisis began which prompted upbeat comments from the Spanish Secretary of State for Employment.

Engracia Hidalgo told reporters: “The fall in unemployment and improving recruitment are no longer purely seasonal or temporary phenomena, rather these are sustained trends that are going to be reinforced month on month and are consistent with the data on hiring.”

The latest available number for Spain’s overall unemployment rate was almost 26 percent of the workforce. That was in the first three months of this year.

That total is based on a survey of households and is considered to be more accurate than the job centre tallies.