A day trip to Portugal by zipwire - Fab Timeshare

A day trip to Portugal by zipwire? 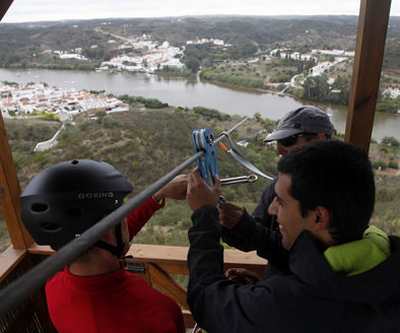 What can you get up to in Spain this year, fancy a quick trip to Portugal with a bit of a difference? How about by zipwire.

A British man has constructed an aerial runway between Spain and Portugal. Businessman, David Jarman, thought the mountains which surround the Huelva town of Sanlúcar de Guadiana, have a natural incline ideal for his project.

It needed 250,000 € of investment and nearly four years of preparation so that nothing was left to improvisation or chance, and the first ride was last November 5. It had been delayed by bureaucratic problems, complicated by dealing with two countries at once.

It is the only cross-frontier aerial runway in existence, with 720 metres between Spanish soil, (Sanlúcar de Guardiana) and Portuguese soil (Alcuotim).

David Jarman told eldiario.es, ‘it is totally safe and new’ and in less than a minute you can travel between the two small villages, Sanlucar de Gardiana with 446 and Alcoutim in 3,770.

For the price of 15 € many have made the crossing. The ticket includes a four wheel drive from Sanlúcar up to close to the Castle of San Marcos, from where the cable begins. The minute has three parts, the first thing the traveller sees is empty space, with the mountain and the river in the background. The comes the steepest section which takes you 20 metres above the river at a speed of less than 80km/h, although David says the sensation is distinct for every person.

To keep his idea in operation, he created a company called ‘Limite Zero’ which is giving jobs to six people, and now with the high season approaching many tourist companies have been making reservations.
David says it is not only for dare-devils but for people who love nature and like visiting the inland villages, where the local bars and restaurants think their new clients have fallen from heaven.

When the adventurer arrives in Portugal this ticket has already been paid for him or her to return by ferry or a kindly local boat.

There are some safety restrictions in force, you have to be over 14 years, weigh more than 25 kilos and less than 110, and a close look is kept on the weather, but given the good climate in the area the attraction could be open until December.