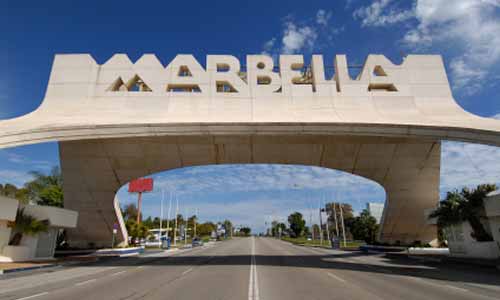 Yesterday we looked at the best time of year to have a timeshare, today we will touch on where. If you have decided to head to Spain in the summer, what can you do in addition to visiting the sun, sea and sand? You can celeb-spot, and what could be more topical than the World Cup?

The Premier League season has drawn to a close, and with it the weekly refereeing furores, diving debates and discussions over the size of Wayne Rooney’s pay packet are put on the back burner for at least another few weeks.

But as attentions turn to next month’s World Cup spectacular in Brazil, those unlucky not to have made the cut have instead drowned their sorrows in a series of increasingly exotic and far-flung locations across the globe.

There have been football stars snapped on beaches in Dubai, beside pools in Las Vegas and cruising the boulevards of sunny LA. But one location more than most still manages to draw Premier League players like the proverbial loose ball in the penalty area – Puerto Banús…

The swanky bars, clubs and restaurants of Banús’ famous frontline are the perfect backdrop in which wealthy young athletes can let their hair and inhibitions down after a season of toil and abstinence.

Among the classic Banús heavyweights – Sinatras, Pangea, Ocean Club – a few new faces have joined the ranks of the elite this summer, with La Sala now topping the table as THE place to be seen if you’ve ever shanked a cross into the Kop. Already this summer La Sala has welcomed mid-ranking Premier League names such as Liam Ridgewell from West Bromwich Albion and Shane Long of Hull City Tigers.

Former Premier League star Roque Santa Cruz has also been spotted, but seeing as he plays just down the road for Málaga CF that’s hardly surprising. Former ‘future Beckham’, aka David Bentley, is a regular face in and around Puerto Banús – he owns Sala Beach and part-owns La Sala – and regularly welcomes former teammates off the plane in anticipation of a week or two soaking up the sun and champers while surrounded by a bevvy of bikini beauties. It’s a hard life, this football lark.

Last year, Arsenal star Alex Oxlade-Chamberlain was a regular face down the Port, but his prominent rise to stardom this season means he’s a few hundred kilometres west right now with the England World Cup squad at their pre-tournament training camp in Portugal. Ashley Cole, former husband of Cheryl and current Chelsea defender, is also another regular face, but after his snub for the World Cup squad this month, perhaps he is intent on keeping a lower profile?

If so, he is wise to steer clear of Marbella at this time of year, as the resort transforms into one big, celebrity-endorsed party town. So if you haven’t yet experienced the buzz of early summer on the Costa del Sol, there is still time to book a flight to Málaga airport. Go on, you know you want to!